Every Healer class ranked by their performance in Rated PvP according to the latest statistics.

Healing in World of Warcraft comes with its perks, no matter what content you want to do. You get to skip the line in Looking For Group and invited quickly to groups. In PVP this is also true! Whether it’s Battlegrounds or Arenas, healers get invited quickly and that fact in of itself is enough reason to try healing.

Yet common questions that come up from people wanting to dive into healing are…. Where do I start? Which class do I pick?

Well, no need to worry. We will go over each healer class and their place in Shadowlands PVP and make it easy for you to start your healing journey. 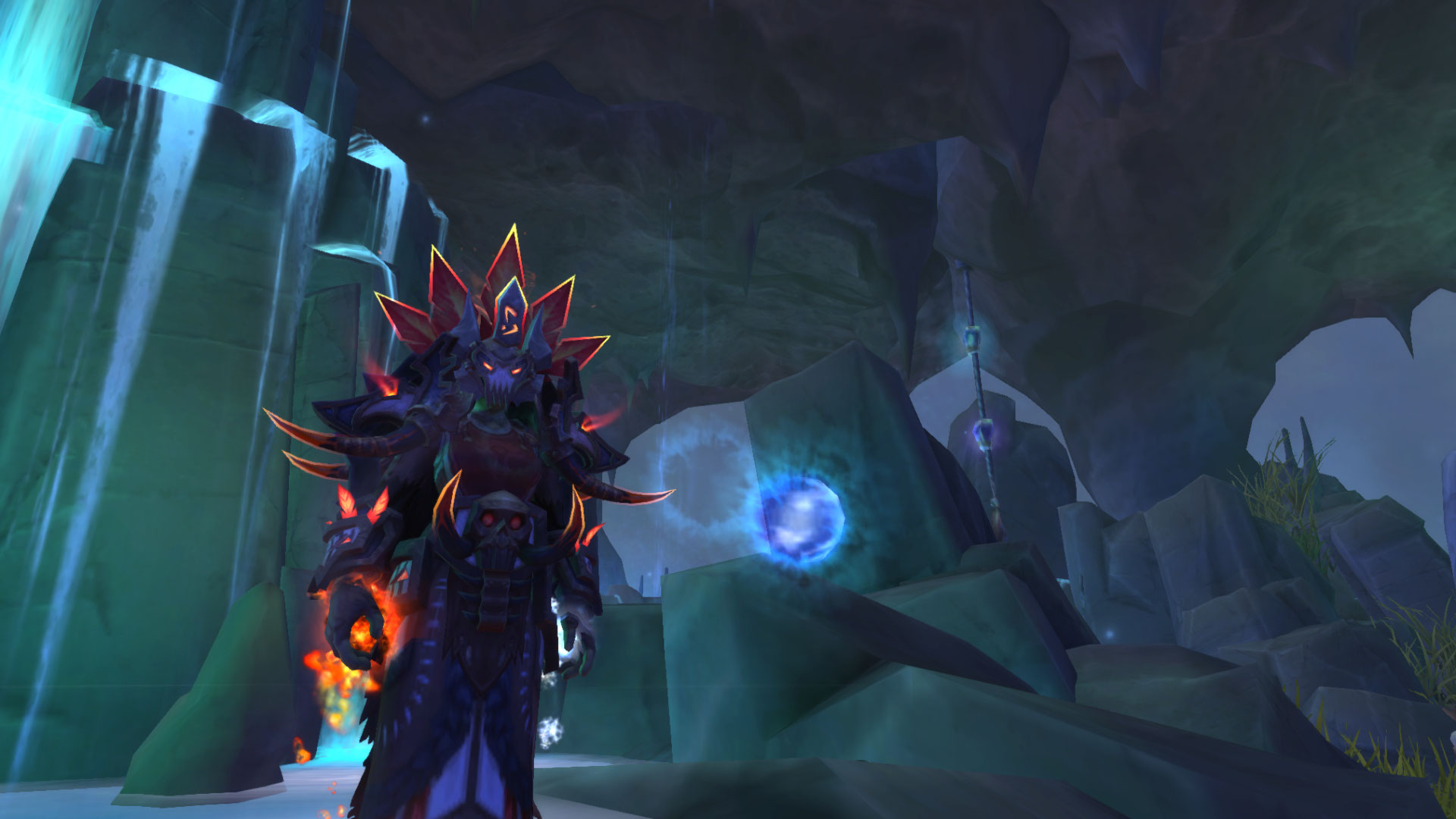 Restoration Shamans can fit into multiple different team compositions and bring an aggressive toolkit that can help your team land kills. Shamans don’t need to cast as much as other healers, having a great mastery effect that increases your heals significantly the lower the health of your allies are. Shamans also are the only healer with a ranged interrupt, making them scary to deal with if they choose to push in.

In Battlegrounds, Shamans are in fact one of the best healers, having some strong AOE healing with Chain-Heal. Additionally, Shaman totems such as Healing-Tide Totem, Grounding Totem and Skyfury Totem benefit everyone on your team, making them extremely potent in a Battleground setting.

Despite these great strengths, Shamans have a few weaknesses. Their Crowd Control can be quite difficult to use and is countered by certain classes. Capacitor Totem is an AOE stun effect but needs 2 seconds to charge up, needs to be placed well and also can be killed by enemy players. Hex is an incapacitate affect but is dispellable by Mages, Druids, and Shamans by their remove curse spells.

Another big weakness is the fragile nature and limited range of Shaman totems. Your big cooldowns, Healing-Tide Totem and Spirit-Link Totem can be killed quickly and have range limitations. Even Ascendance, a big healing cooldown requires allies to be within 20 yards for the initial heal to apply.

If moving around and staying with your team while being aggressive with Purging, Wind-Shearing and using big healing cooldowns sounds like fun, then Shaman is your pick. 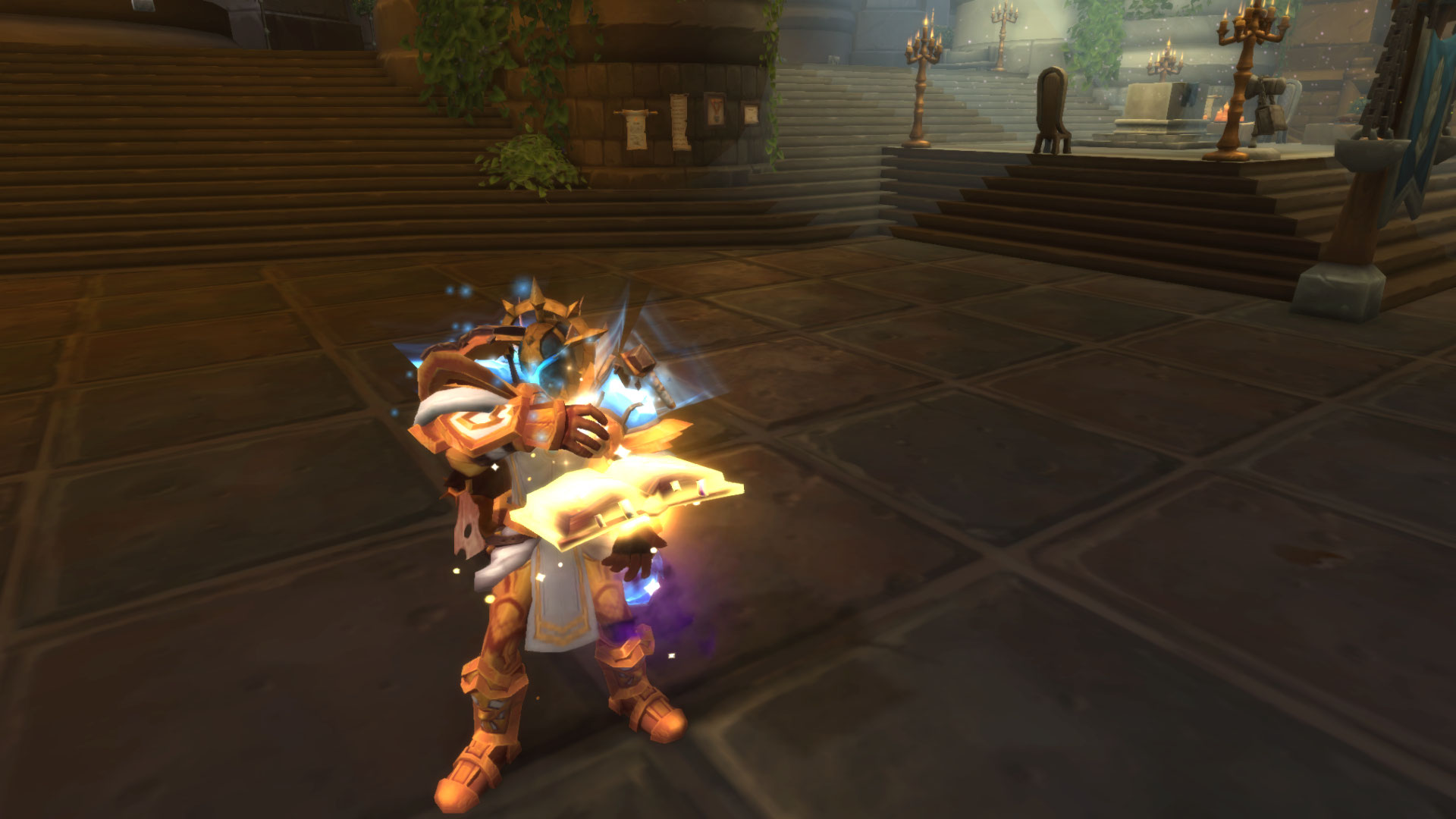 In Shadowlands, Holy Paladin can use a unique combination of Covenant and Legendaries that make their healing instantly save someone on death’s door, making them powerful healers. Holy Paladins also have two immunity spells, and can prevent death through Blessing of Sacrifice and Divine Shield. Because of the fast-paced nature of Shadowlands PVP, these spells are more valuable than ever before. Paladins also have a very versatile Crowd Control kit through a 6 second stun and being able to choose between Repentance and Blinding Light to better fit your team composition. They also have potent support spells such as Blessing of Freedom, a snare removal and Blessing of Protection, a physical damage and Crowd Control removal.

In Battlegrounds, because of the AOE healing of Light of Dawn, Holy Paladins dish out so much healing that teams often desire them just because of this reason alone.

Despite this, Holy Paladins lack mobility, with only one long cooldown spell called Divine Steed. Because of this, Paladins needs to be very methodical with positioning. Paladin can also feel difficult to play because of the constant mini-game of trying to maximize your Holy Power generation. Paladins need to weave in offensive spells like Hammer of Wrath, Vanquisher’s Hammer and Crusader Strike to make sure they have enough Holy Power to deal with incoming damage. Fall behind, and you can quickly lose.

Holy paladin is definitely fun and satisfying to play. If you like using big cooldowns that can turn the tide of battle and controlling your enemy, then this is the class for you. 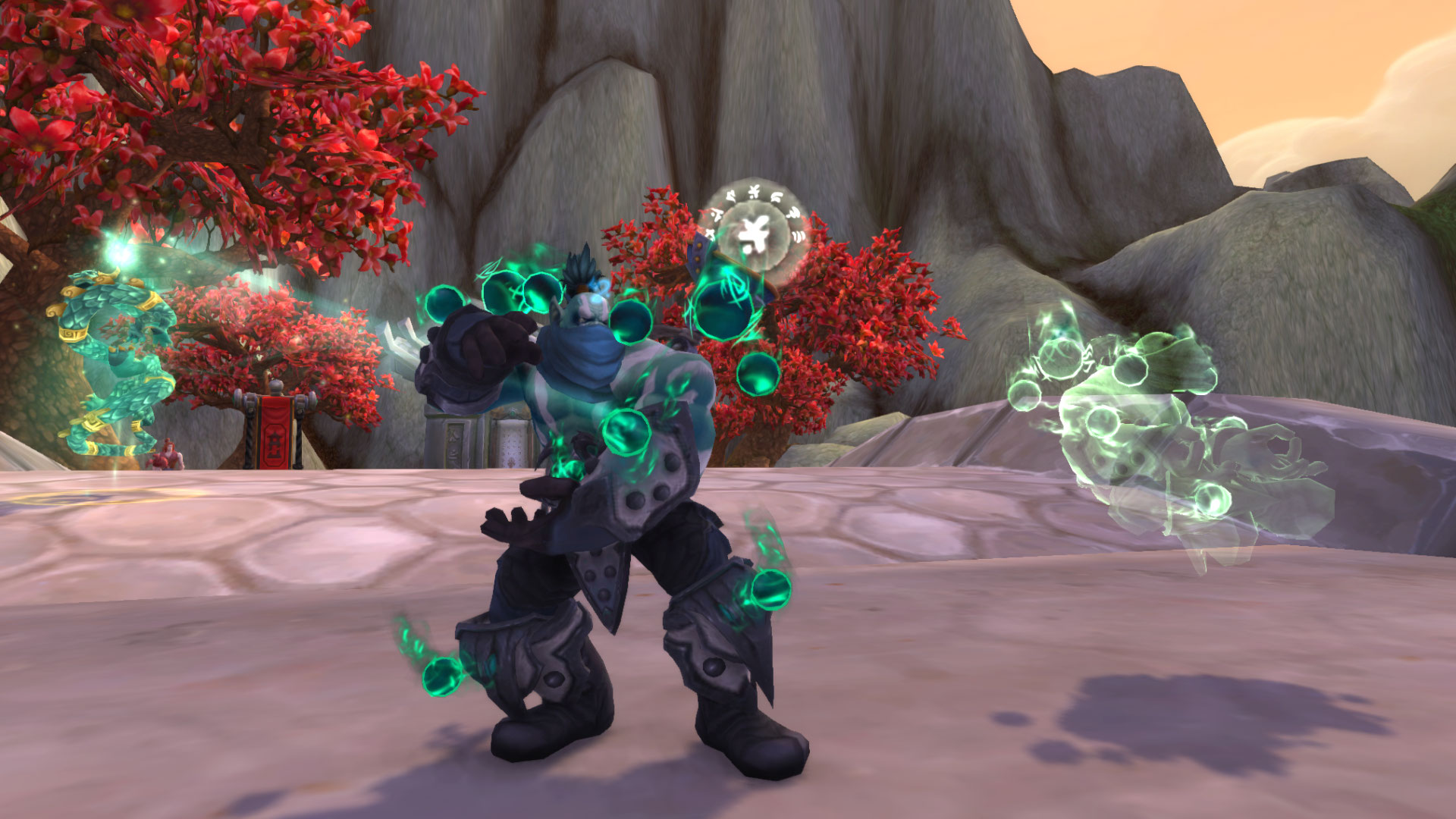 Mistweaver Monks are a unique healer, having the strongest and most mana efficient single target healing by a large margin compared to other healers. They are also extremely mobile and can even use their teleport ability while in stuns. They also have two amazing cooldowns, Life Cocoon, which is a huge absorb shield and Revival, which heals your entire party, removes magical effects and gives them a short 2 second immunity to spells. Their Crowd Control is also easy to use, an instant cast incapacitate called Paralyze and an AOE stun that hits anyone in your immediate vicinity called Leg Sweep.

In Battlegrounds, Mistweavers fall short compared to other healers because of their lackluster AOE healing, yet Revival is such a strong cooldown that Mistweavers still perform well due to it.

Even though all these strengths make Mistweaver Monks seem powerful, and they certainly are in certain compositions and situations, Mistweaver Monks also have some big weaknesses. One of these is their lack of instant cast healing and thus opening them up to being completely shut down against ranged interrupts. Playing against Hunters, Mages, Warlocks and Shamans who all have long ranged interrupts will be difficult as a Mistweaver. This class relies on being able to cast Soothing Mist to chain into your healing spells and so good positioning and the skill to cancel your casts to negate interrupts from locking you out is key. Mistweavers are also extremely weak too physical damage. If a Warrior, Feral Druid, Rogue or Hunter can attack you, then you can quickly die within a few seconds.

Because of these strengths and weaknesses, Mistweaver has evolved into being a quick-paced ,high-intensity healer that can heal through everything and lives on a knifes edge. 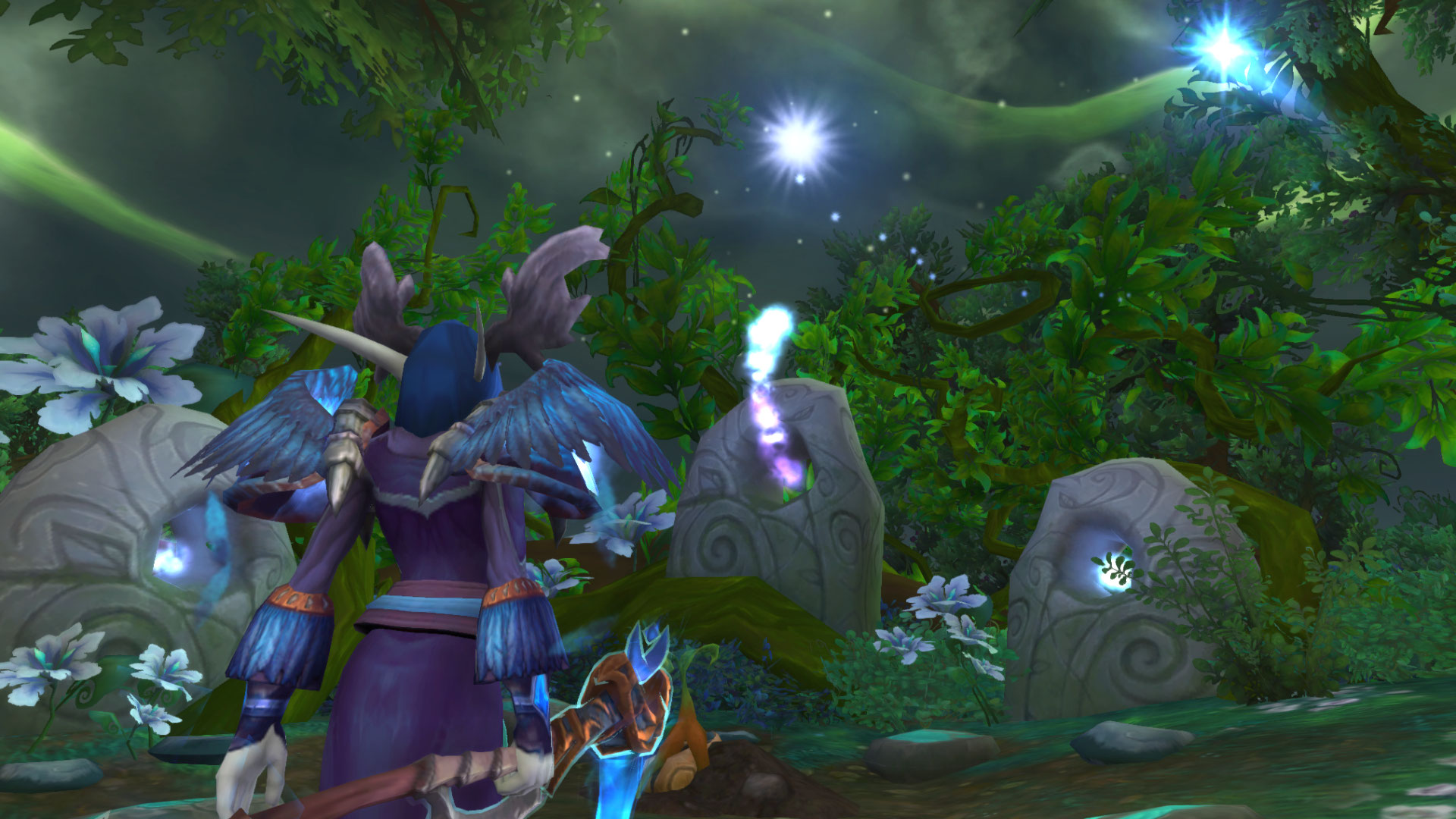 Druids can prepare for incoming damage better than any other healer with their strong heal over time effects. With Cenarion Ward being a heal over time that’s undispellable as well, this gives druids the ability to eat long Crowd Control chains while having their teammates be completely fine. Additionally, Druids have amazing Crowd Control - like Cyclone, Entangling Roots, a stun and an AOE Incapacitate. These spells really make Druids the Crowd Control king of healers.

In Battlegrounds Druids are fairly middle of the pack compared to other healers, not being too strong as healing multiple targets eats through a lot of mana and not providing much utility for large teams.

Druids have good healing, useful even when in Crowd Control, and have a lot of Control spells, so where do they falter? Well, because of the nature of healing over time effects, Restoration Druids are weak to enemy players who track your healing affects and swap between your teammates often. This forces the druid to use excessive amounts of mana to keep multiple targets healed and can be deadly to deal with. Besides this, some enemy compositions will have 2 or 3 players who can dispel your healing effects. This can quickly force a Druid to play very passive as they struggle to keep their teammates alive. 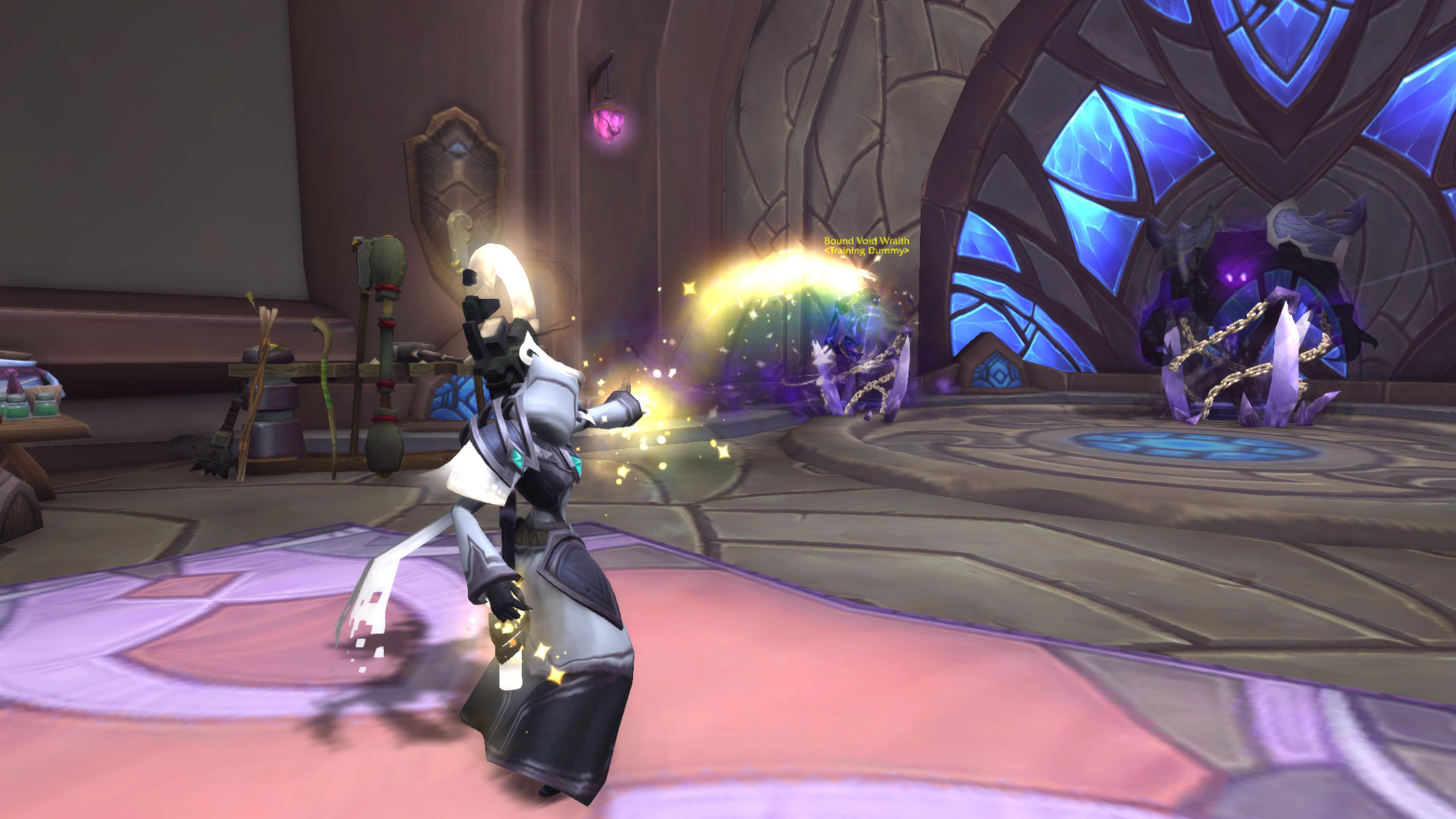 Discipline Priest is an aggressive healer with powerful instant cast healing and some safety against interrupts because of having two different spell schools. Currently Discipline Priests can use a certain combination of Legendaries and other effects to make their Penance spell very strong. One fully channeled Penance can heal your ally back to full or deal serious damage to an enemy. Discipline Priest in fact, have the best consistent burst damage among all other healers, being the only healer that has reasonable availability to dish damage at all times because of their Atonement healing.

Discipline Priests excel in Battlegrounds because of their strong AOE healing, being able to apply Atonement to multiple targets using Power-Word: Radiance and healing them all with Penance and other damaging spells.

Even though their strengths are clear, Discipline Priests suffer through intense mana issues, more-so than other classes, and are also suspectible to getting killed. Be very careful with your Pain Suppression spell, as using it on an ally means you can no longer play too aggressive.

Overall, Discipline Priest is a great healer for beginners and veterans alike, and also lets you deal more damage than any other healer, making it fun to play and feel you are contributing to kills.

The strengths of Holy Priest are similar to Discipline priest, having strong single target and reasonable AOE healing. The major differences are that Holy Priest has more Crowd Control, with a stun or incapacitate depending on your talent choice, Holy Priests do not require help to get their fear Crowd Control onto enemy players. Besides this, Holy Priests are a lot harder to kill, having potent cooldowns that help them survive such as Greater Fade and Divine Ascension.

In Battlegrounds, Holy Priests work reasonably well. They have good AOE healing cooldowns and spells such as Divine Hymn and Holy Word: Sanctify. Holy priests also provide a useful mana return cooldown for your healer teammates as Hymn of Hope.

Holy Priests struggle if they cannot find the opportunity to cast. They have a cooldown recovery mechanic where the more spells you can cast such as Smite or Flash Heal - the more uses of your strongest spells such as your stun you have. This can mean that Holy Priests need to position correctly and cast often or they will find themselves unable to keep their teammates alive.

Where does the data come from?
Our rankings are based on statistics. We use algorithms to process thousands of Top Rated PvP Players (from Blizzard API) every day. By analyzing this Big Data we are able to assess PvP performance of every class and compare them.
How to use these rankings?
If you are looking for the best performing PvP Healer class, the safest option is to pick the ones from S-Tier – they have been ranked as the most popular among World's Highest Rated PvP Players as of now and thus considered to be the current PvP Meta in WoW.