Shadowlands: Best Addons to Have

Welcome to WoWMeta’s guide on the best addons in Shadowlands! Addons can be an overwhelming topic, for new and old players alike. However, I’m here to help guide you through the best and most popular addons that are used in the game today. We’ll look at the top 5 most popular addons, as well as some personal recommendations.

Before we start, you might need to know how to acquire addons for World of Warcraft. Although there are a few options, the most common is by using the CurseForge client that is currently integrated within Overwolf. Once you’ve downloaded it, open up the client, select World of Warcraft, and then click on the “Get More Addons” button at the top. 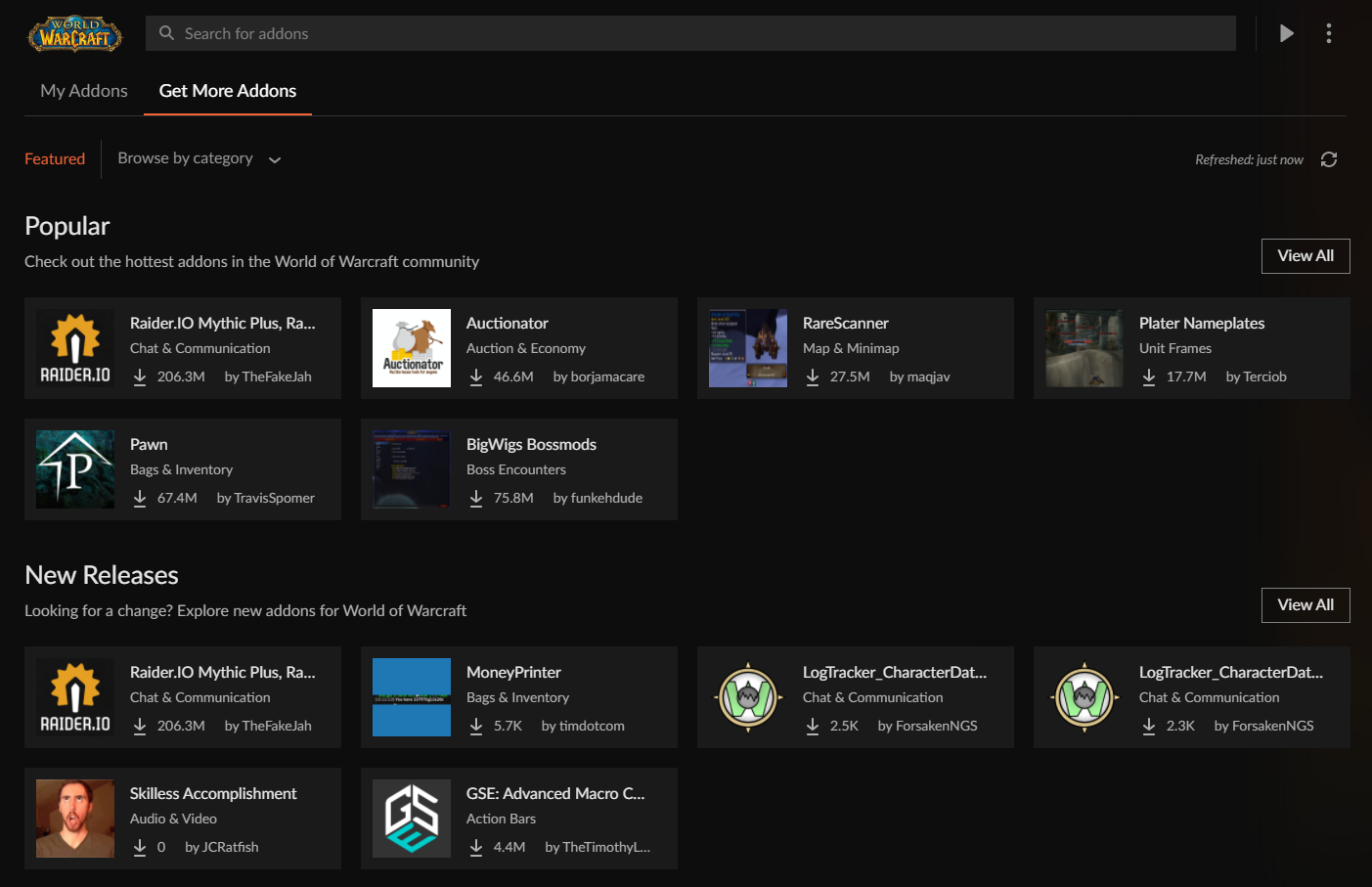 On the featured section, you will see a number of popular and new addons. However, I would recommend clicking on “Browse by category”, and selecting “All Categories”. This will take you to the below screen, where you can see the most popular addons and the option to install them. 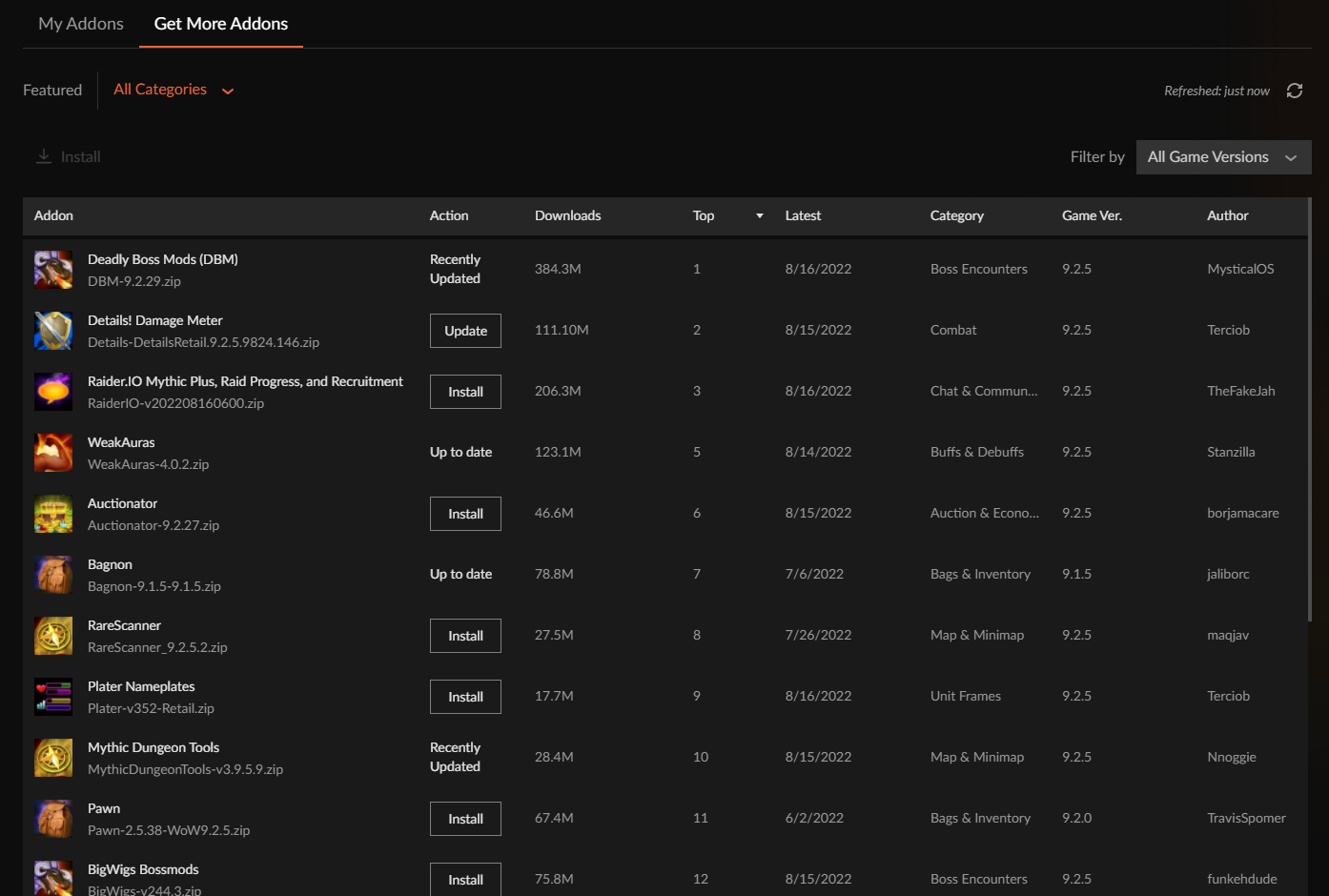 Once an addon has been downloaded and installed, it will be automatically integrated into World of Warcraft. On the character select screen, and in game through the options menu, there is an “AddOns” button that allows you to enable or disable addons that you currently have installed. 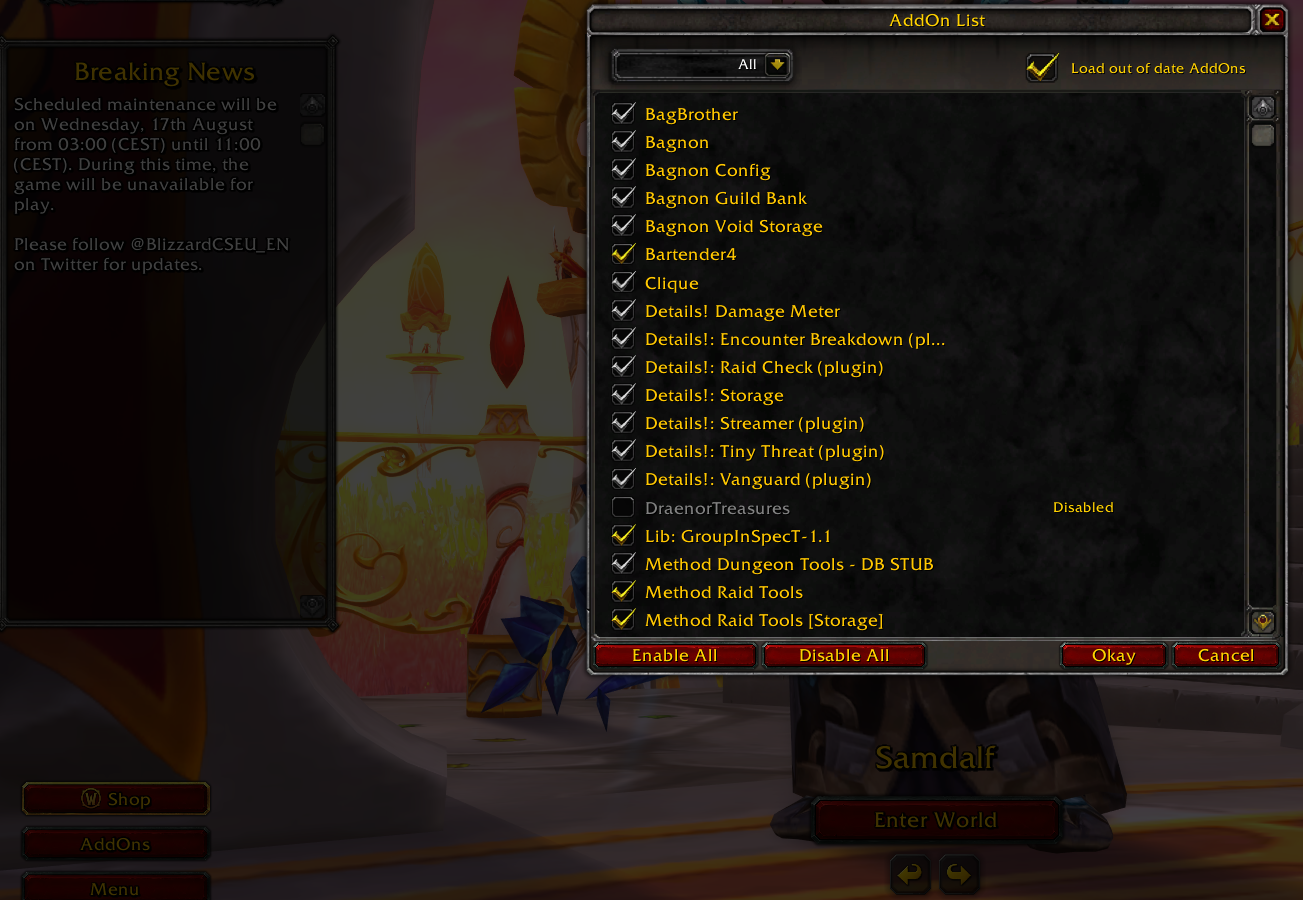 Some addons work straight out of the box. Some addons will require a little fine tuning to make them look how you’d prefer. Some addons won’t do anything until you set them up to do what you want them to. I’ll mention what might be required for each addon as we talk about them.

Now that you’re here, let’s go through the best addons in Shadowlands!

If you are going to get any addon, get this one! By far the most popular, and also the most essential, DBM provides a whole package of warnings, announcements, instructions, and timers for any raid boss, world boss, or dungeon. It can automatically mark players who have been targeted by mechanics, it can warn you when you need to interrupt an ability, it can tell you when the boss is next going to cast something. DBM is the baseline expectation for any WoW player, and this is evidenced by its popularity.

BigWigs also exists as an alternative, which some players prefer, but there is no denying that DBM is the more popular of the two, and the most popular addon overall.

DBM works straight out of the box, though there are many customizable settings. Below, you can see the addon in action. At the top it has announced that three players (Z, M, and H) have been targeted by a bomb ability, which the game indicates with golden circles and arrows. DBM has marked each player with a star, diamond, or circle, and is making their character announce a countdown for when the bomb is going to explode. On the right hand side, you may also notice it shows a Radiant Energy meter, which shows how much energy Guardian of the First Ones has left, which is relevant for another mechanic. 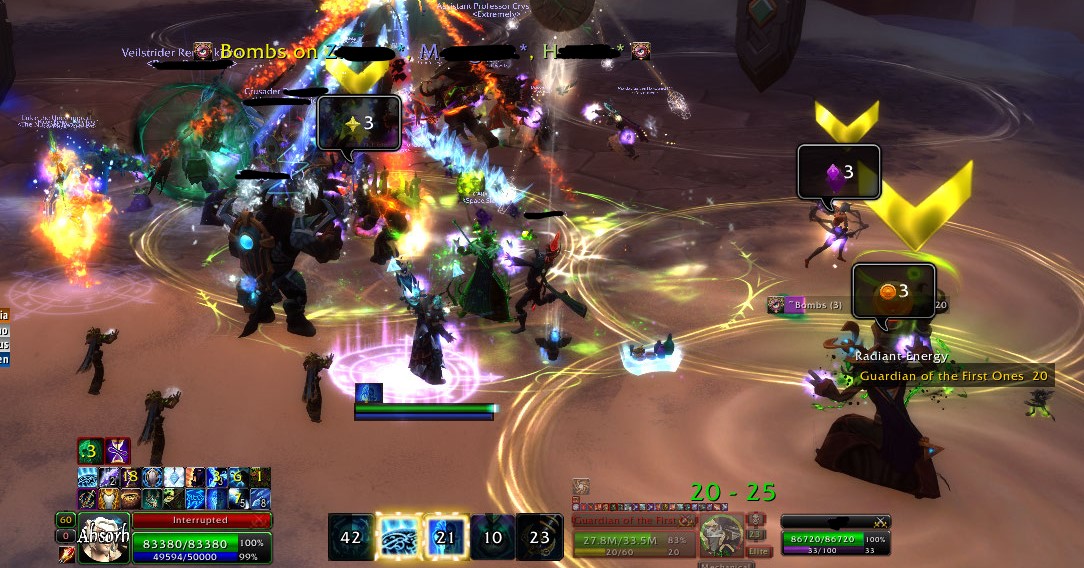 Here, you can see how DBM shows timers for upcoming abilities. They are ordered based on what is coming first, and will either appear in the center of your screen if they’re happening soon, or off to the side if they’re more than 10 seconds away.

DBM also makes use of audio warnings, whether it be klaxons to warn you of a deadly ability you may need to move from, or a virtual voice instructing you to move away. All of this is fully customizable, along with how players are marked, what abilities should be announced, and many other options. Below you can see the settings screen for Guardian of the First Ones, with individual options for each ability. 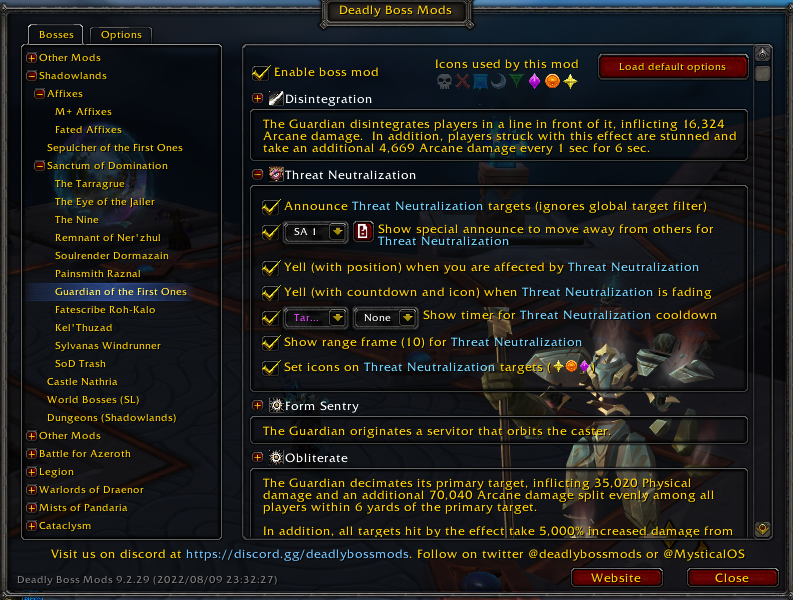 There are many different DPS (damage per second) meters available, and while Details is the most popular, they all perform the same primary job - to show you how much damage you’re doing. You can track your own performance, see how you compare to others, and see the breakdown of your damage by ability or by target. Many DPS meters also perform many other functions, such as allowing you to track healing done, damage received, who died and how, buff uptime, and more. While a DPS meter is absolutely not necessary, it is a great first step to take towards monitoring your own performance and understanding how you can improve.

This is another addon that works straight out of the box, though there are plenty of settings to change the appearance, how it tracks and stores data, and other things. It can even generate graphs so you can monitor individual or overall damage over time. 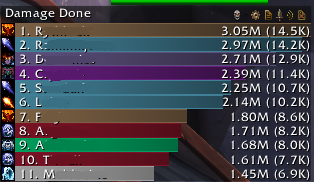 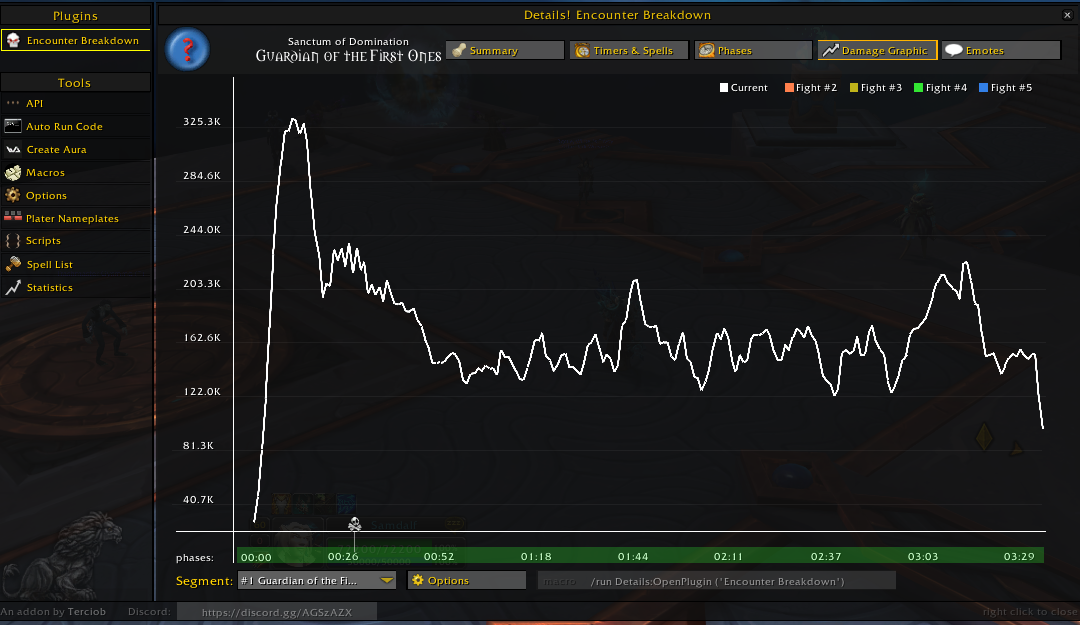 WeakAuras is likely the most complex but most versatile addon in the game. It is so powerful that many of the top guilds in the game hire a “WeakAura guy” whose sole job is to create weakauras on demand, based on whatever the guild needs.

A weakaura can be something as simple as popping up a notification to tell you when one of your abilities triggers another, or your major damaging ability is available to use. It can also be as complex as creating interactable windows in-game that allow you to trivialize encounter mechanics. WeakAuras is often overlooked by newer players, as technically it does nothing until you ask it to. But it is an addon that will grow as you do, and as you identify its strengths and what it can do. You can find an incredible number of weakauras online, with the most common source being https://wago.io/.

Here are some examples:

I created a set of weakauras that allow me to see when certain abilities are on cooldown or available to be used. Some abilities that provide temporary buffs will glow when they’re active. It is common for a lot of players to set up something similar, and place them just below your characters feet, so you can keep the most important information close to where you will always want to be looking, rather than having to look at the very bottom of your screen. While I created my own, there are many class and spec specific packages available that can provide even more information. 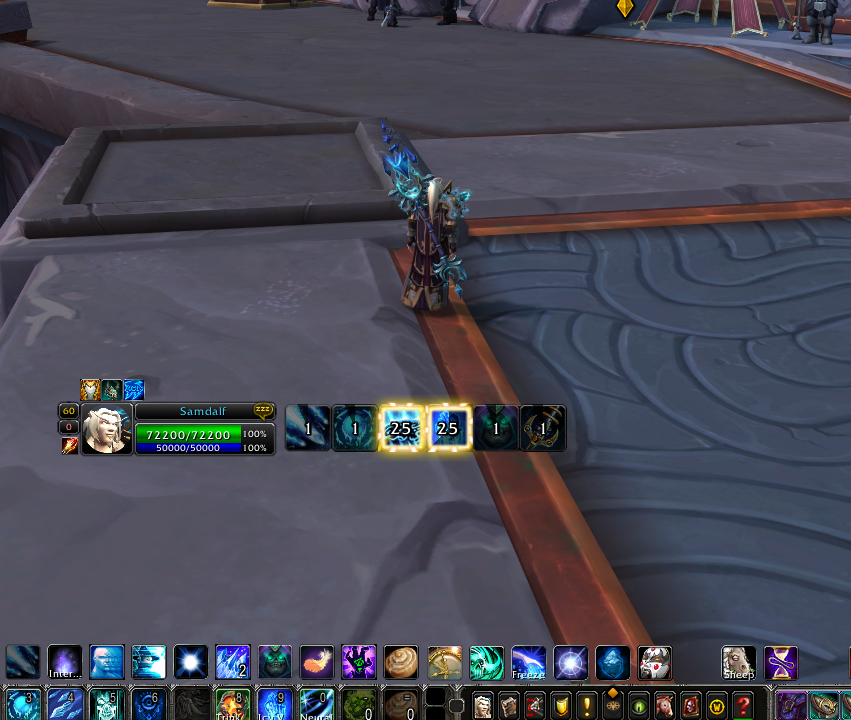 Mythic Plus dungeons have a lot of deadly abilities that need to be interrupted, sometimes so often that one player is unable to cover all of them. A common weakaura that is used works in tandem with another addon to create a set of bars that allows you to see who has their interrupts available and who does not. This means if a deadly ability is about to be cast, you can see who is able to interrupt it - if everyone else’s interrupts are on cooldown, it’s time to use your own!

Some raid mechanics require certain players to perform actions. Sometimes this can be pre-assigned if you know what’s going to happen and when. Sometimes DBM will assign this for you. Sometimes it requires on the spot decision-making, as only certain group members have the ability to complete an action. When there are multiple actions that need to be performed by multiple people in a short window, it can be a difficult task to assign everyone to the correct task while in the middle of a fight. WeakAuras can do a lot of that work for you.

Below, there are two weakauras working together. The first is the numbered boxes, and the second is the “Example Rune” text. The particular fight this weakaura deals with has 6 different rings that need to be spun back into place. Only some of the rings need to be spun, and only some players are able to spin them, both of which will be random every time. The first weakaura will be used by the raid leader; they can click on the boxes that match the rings that need to be spun. This will then send the information to every raid member who has the second weakaura, which will automatically identify those players who are able to spin the rings, and assign a player to one of those rings. That player will then get the text on screen telling them which ring they need to spin, and the marker that represents it. All of this can be done instantly. 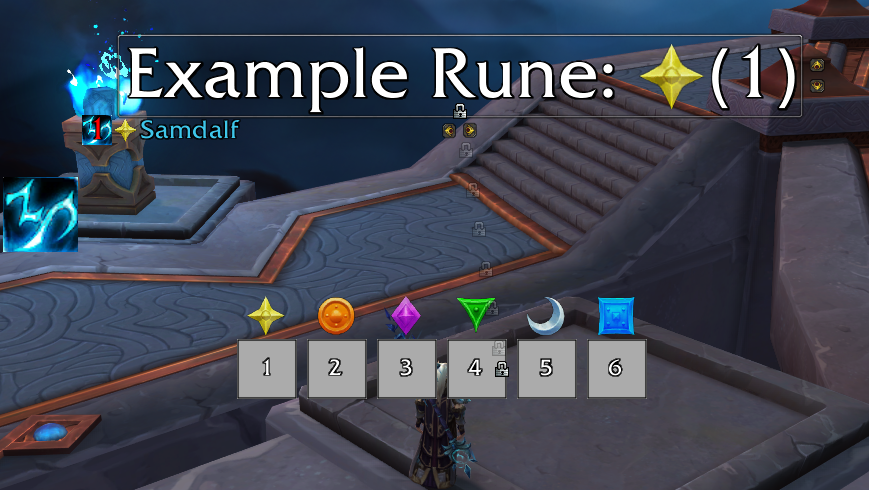 Before Mythic Plus rating was embedded into the game, Raider.io (often referred to as rio) was the go-to site to investigate prior performance for players who might want to join your dungeon or raid group. The addon continues to provide that information, and provides much greater detail than just the Mythic Plus rating in game. You can see their overall performance for the current season and older seasons for Mythic Plus, broken down by spec or role as needed. You can see their progress on raids across different difficulties. The Raider.io addon makes finding the ideal players for your dungeon or raid groups that much easier. This is the kind of addon that becomes more necessary as you reach higher and harder content - for newer players, I would not worry about this until you feel you need to investigate people you play with. 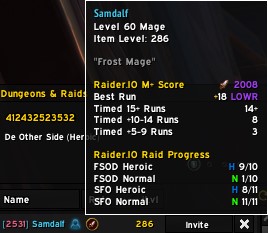 Although less necessary since the auction house rework at the end of Battle for Azeroth, Auctionator is an addon that is designed to make using the auction house that much easier. It simplifies many of the processes, automating the pricing of listings and allows you to purchase multiple items at once. It also has the ability to tell you how much something is worth on the regular in-game tooltip, so when you loot a random sword from a basic enemy, you don’t accidentally sell something that could be worth a lot of money.

Not all addons are available on the CurseForge Client, and ElvUI is perhaps the most notable. It is one of the most common addons that allows you to fully customize the interface, whether that’s changing the location and layout of your ability bars, raid and party frames, minimap or chat window. It also offers a lot of other features that would otherwise require separate addons, such as better nameplates for enemies that can track who they are attacking, or reorganizing your inventory and allowing you to automatically sell junk when you talk to a vendor. ElvUI is fully customizable, and there are a lot of templates available to download online from https://www.tukui.org/welcome.php. 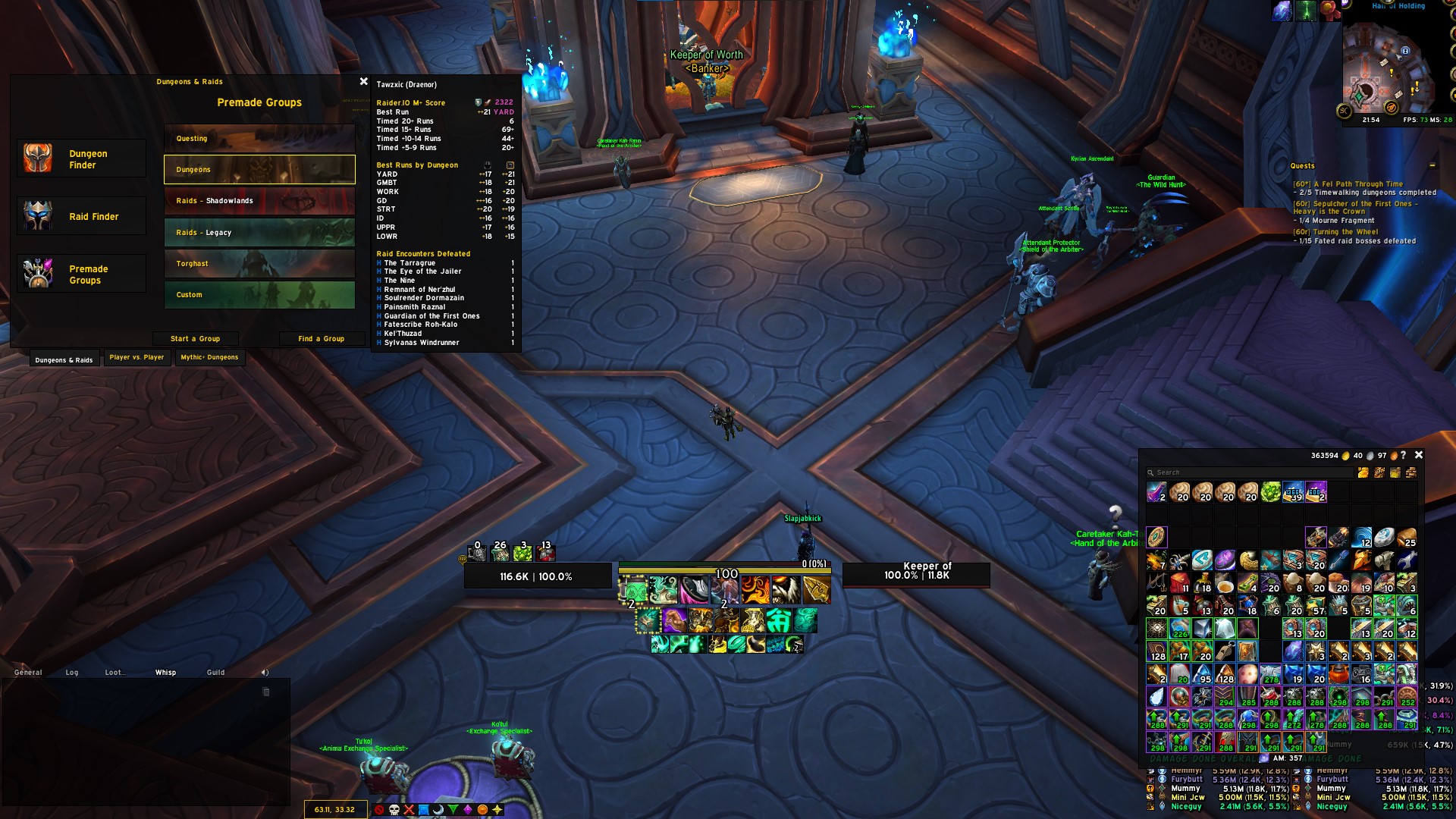 Now that we’ve been through the most popular ones, I’d like to go through a quick rundown of some others that I personally use and strongly recommend.

The “I don’t want to use ElvUI” Package

Bartender4 - Allows you to easily reconfigure your ability bars

Bagnon - Merges all your bags into one, allows you to instantly sort them, and allows you to set up bag filters so all of a certain type of item goes into one bag. Also lets you see the inventory and gold of your other characters.

Method Raid Tools - Formerly known as Exorsus Raid Tools, it provides a load of handy trackers designed for raiding. Primarily for raid leaders to track important abilities, but the note tool can be useful for any raider.

RangeDisplay - A minor one, it simply tells you how far away you are from your target, focus target, or mouseover target. Great for ranged DPS and healers who like to stay at the edge of combat.

I hope this guide can help you through your World of Warcraft journey!